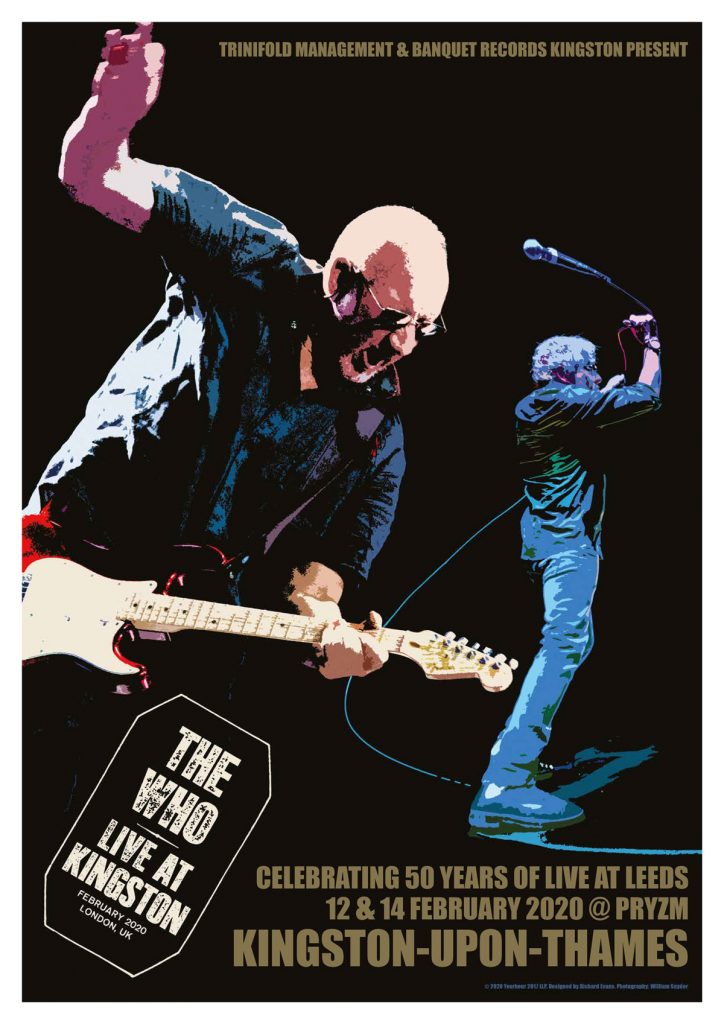 Friday 14th February 2020 was the fiftieth anniversary of The Who’s historic concert in the refectory at the University of Leeds. The show was recorded and produced probably the most famous and some say, the best live album of all time. To celebrate such an auspicious occasion the band decided to do a small, informal gig at Pryzm discotheque and nightclub in Kingston-Upon-Thames in Surrey. Not the most typical of venues for The Who, but as it turns out they had in fact played this place some 53 years before when it was the Granada cinema. And in 2020 they played two shows, just as they had done at the Kingston Granada in ’67. The response for tickets this time round was so amazing the promotors decided to add another two shows on Tuesday 12th.

Bravado, The Who’s merchandisers produced a small range of specific merchandise for these four shows and asked me to design a poster, or ‘art print’ for the occasion.

Utilising a couple of individual shots of Pete and Roger by Who tour photographer William Snyder, I created this Pop Art image by saturating and flattening the colours and pushing the contrast up, which had the effect of bringing out the textures in the clothing, particularly in Pete’s shirt. I love that little splash of bright red on Pete’s Stratocaster and the folds and creases in Roger’s shirt and jeans. The type at the top and the large type at the foot were printed in a spot gold metallic ink and the poster printed on a heavyweight paper. The trimmed size is 402mm x 594mm (16.5″ x 23.5″).

All four shows were acoustic sets with both Pete and Roger on guitar (and assorted banter) accompanied by Simon Townshend, Phil Spalding on bass, Jody Linscott on percussion and Billy Nicholls, backing vocals. Sadly these were the last shows The Who played before the Covid-19 pandemic hit hard and lockdown began a month later.